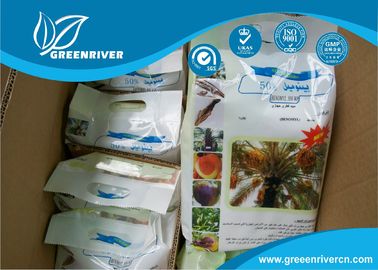 Benomyl (also marketed as Benlate) is a fungicide introduced in 1968 by DuPont. It is a systemic benzimidazole fungicide that is selectively toxic to microorganisms and invertebrates, especially earthworms. Benomyl binds to microtubules, interfering with cell functions, such as meiosis and intracellular transportation. The selective toxicity of benomyl as a fungicide is possibly due to its heightened effect on fungal rather than mammalian microtubules.

Due to the development and worldwide prevalence of resistance of parasitic fungi to benomyl, it and similar pesticide compounds became largely ineffective. High legal costs associated with it caused DuPont to cease its production in 2001 after 33 years on the market, and voluntarily requested cancellation for its registration.[1][2] However, as DuPont's patents expired long ago and in some countries benomyl's registration has not been revoked, other manufacturers still produce it.

Effective against a wide range of Ascomycetes, and Fungi Imperfecti and some Basidiomycetes in cereals, grapes, pome and stone fruit, rice and vegetables. It is also effective against mites, primarily as an ovicide. Also used as pre-harvest sprays or dips for the control of storage rots of fruit and vegetables. Typical rates are: on field and vegetable crops, 140-550 g a.i./ha; on tree crops 550-1100 g/ha; for post-harvest uses 25-200 g/hl.